Taimen Day was much informative for local communities | WWF

Taimen Day was much informative for local communities 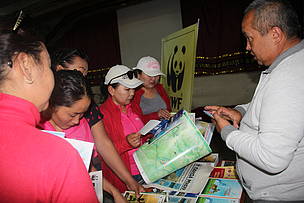 The participants also actively participated in the Q&A competition on taimen and fisheries.
© WWF Mongolia
At initiative of WWF-Mongolia a campaign for Taimen conservation has been successfully implemented in Onon River Basin since 2010.  The purpose of this event is to increase the involvement of local communities in conservation activities through increasing awareness ​​and significance of taimen (Hucho taimen) in the basin, which is a headwater of the Amur River.
This year's event was organized in June 2019 in collaboration with WWF-Mongolia, Onon River Fishing Club, Onon Ulz ​​River Basin Administration and Onon Balj National Park, and more than 300 people participated. In the previous years, the event used to be held in only one soum, but this year it was organized in five soums of Onon river basin.
During the "Taimen day", promotional materials about taimen value and significance were presented for the participants and was much appreciated. The participants also actively participated in the Q&A competition on taimen and fisheries. Also, the Onon River Fishing Club reported on their work on taimen conservation and illegal fishing, and received citizens’ opinions for further work that need to be done.
The WWF-Mongolia helps the locals, who used to illegally fish, join a club, where they take part in conservation measures. This effort has been showing good results and the locals are keen to cooperate in conservation activities.

The participants also actively participated in the Q&A competition on taimen and fisheries.
© WWF Mongolia Enlarge
Like this article?