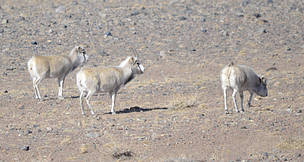 The assessment was performed using internationally recognized line transit method.
© WWF Mongolia
The Mongolian saiga antelope is a critically endangered species, which inhabits only in Mongolia.  Its population was reduced to 3800 as of December, 2018, due to the factors such as outbreak of goat plague, illegal hunting, habitat loss, and food shortage during harsh weather conditions. Experts from WWF-Mongolia together with Saiga Ranger Network completed a population assessment in January 2020 and the number of Mongolian saiga population is increased to 5074 individuals at minimum.
The assessment was performed using internationally recognized line transit method for saiga distribution in the Shargiin Gobi, Khuis Gobi, Durgun steppe, Mankhan soum of Khovd province, Zavkhan soum of Uvs province, and Durvuljin soum of Zavkhan province. B.Gantulga, species officer from WWF-Mongolia said “Last summer was pleasant for saiga, unfortunately, it doesn’t happen every year. Therefore, the parties shall continue their strong conservation efforts”.
Although the Mongolian saiga population has grown substantially, this is not a source of relief because the threats are serious that droughts, overgrazing and infectious diseases could still have devastating effect on vulnerable population of the Mongolian saiga. As of 2014, there were 15,000 Mongolian saigas. Unfortunately, thousands of Mongolian saigas died in 2017 due to the goat plague and dzud (combined effect of the lack of grass, extreme temperature and heavy snowfall). Thus, the reintroduction of Mongolian saiga and the creation of several independent populations can reduce the risk of drought, dzud, and infectious diseases substantially. Researchers also pointed out that the protection of Mongolian saiga range by the State and the reduction of illegal hunting is a way to save this extremely rare species from the extinction.